If you love the sea, golden sand, a superbly equipped beach and an unparalleled range of services, you are in the right place. Rimini has a centuries-old culture of hospitality, the hospitality of the places and its inhabitants has been known for generations of vacationers. The sea here is a way of life, in summer fun or winter peace. The sound of the sea is music.

And the sea is right in front of One Hotel.
The poet Arthur Rimbaud wrote "Eternity is the sea mixed with the sun".
So please pay attention: you may be enraptured seeing the sun rise over the sea! 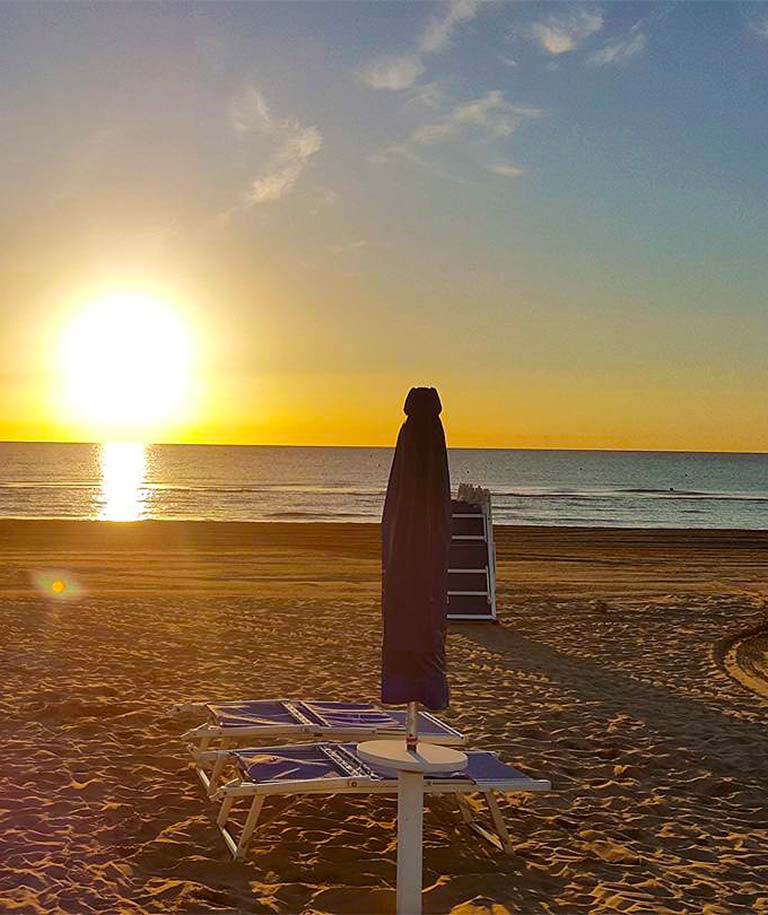 If you are a sports fan and even on vacation you do not want to give up wellness and fun, Rimini offers plenty of alternatives.

On the beach you can have fun playing, for example, beach volleyball, beach tennis, beach soccer or speedminton, or practicing Nordic walking on the beach. Windsurfing, kite surfing or sailing await you among the waves. Nearby you can choose from golf, horseback riding, hiking, mountain biking, cycling, climbing, and free climbing.

Do you want to get around by bicycle? The network of bicycle paths (more than 120 km of bicipolitana) will take you from the sea to the hills. 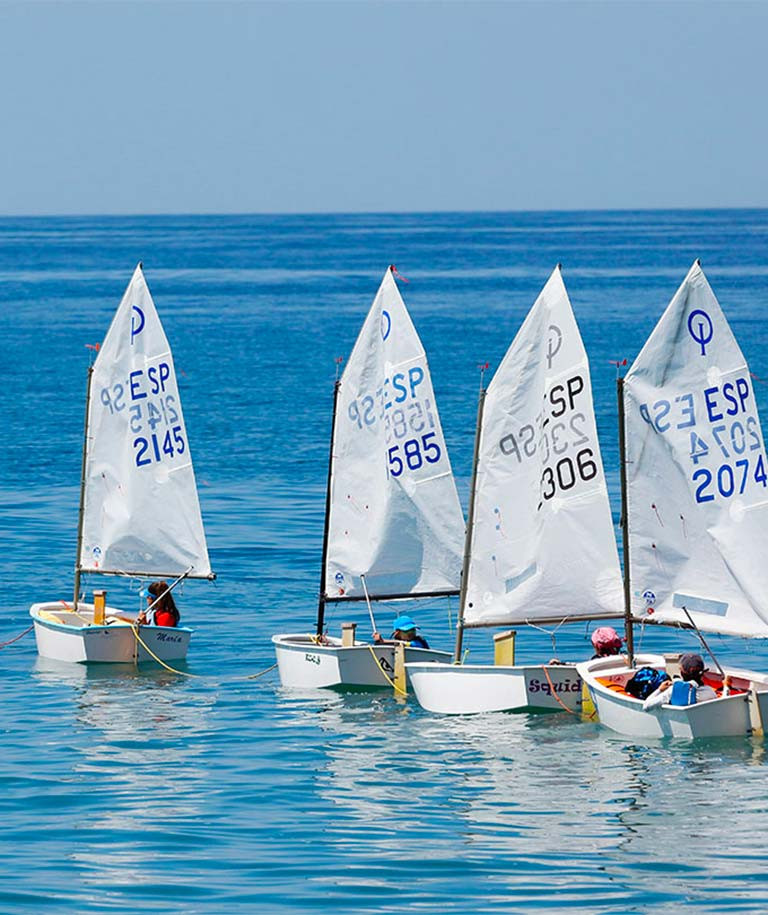 Rimini, a city of culture thousands of years old, offers many historical sites, which testify to its long life, which began in 268 B.C. as a Roman colony under the name of Ariminum.

Over twenty centuries of history are manifested in the historic center: from the many testimonies of the Roman era, such as the Arch of Augustus, Tiberius Bridge, the Surgeon's Domus, the amphitheater, and Piazza Tre Martiri, to those of the period from the Middle Ages to the Renaissance, when it was the capital of the Malatesta seignory, such as Piazza Cavour, Castel Sismondo and the Malatesta Temple, and ending with the neoclassical Teatro Galli. 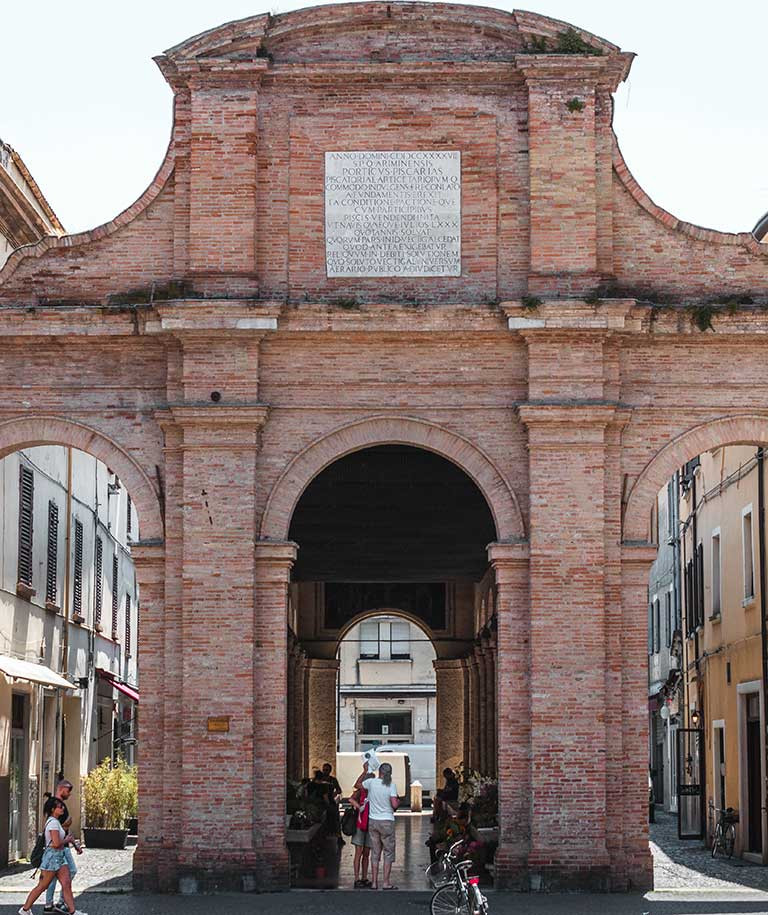 In the historic center of Rimini, right next to the thousand-year-old Tiberius Bridge, you will find the quaint Borgo San Giuliano, an ancient fishing village now restored to new splendor, a place of pilgrimage because it was the birthplace of Maestro Federico Fellini.

Twisted alleys await you, overlooked by small, colorful houses, some decorated with colorful murals executed by Rimini painters to depict the Maestro's films and life.

Here you will breathe an atmosphere charged with poetry, savor the typical flavors of Romagna cuisine, strolling through the charming narrow streets and in the enchanting square on the water. 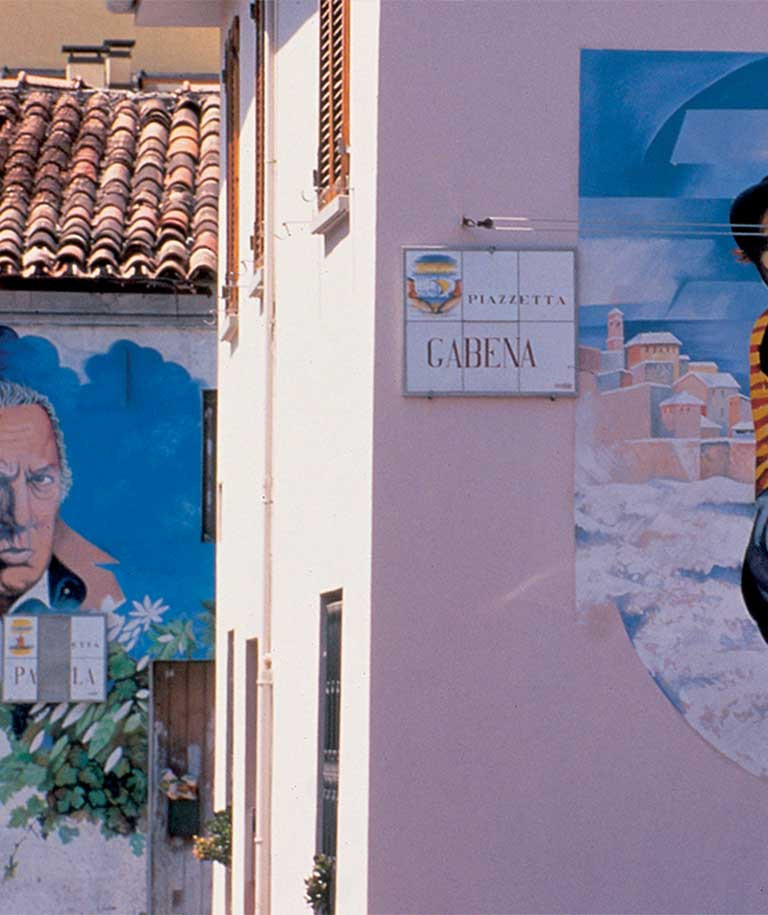 If you are a slow tourist and prefer uncrowded places, you can immerse yourself in the local culture. Even in hyperactive Rimini slow tourism is possible: just a few kilometers from the sea, a splendid hinterland awaits you, which holds fortresses and castles, ancient traditions and unique flavors.

You can alternate days at the beach with relaxing excursions in the green valleys along the Marecchia River, taking the right amount of time to admire the beauty of our area.
A different and pleasant way to spend weekends and vacations in Romagna: the answer to counteract the frenzy of our time and relax. 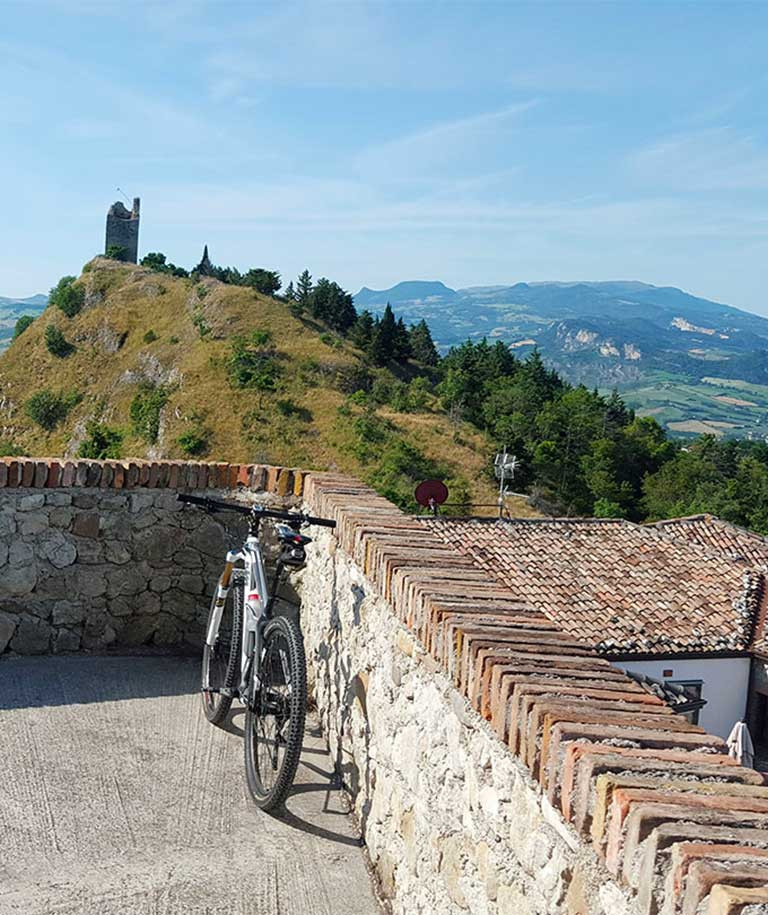 The wealth of authenticity offered by Rimini and its hinterland is immense. Within a few kilometers extend peculiarities and excellences that will leave you breathless.

From the gentle landscapes of the Marecchia Valley to the magic of places such as the ancient Republic of San Marino, whose historic center is a UNESCO World Heritage Site; Verucchio, cradle of the Malatesta; San Leo, in whose fortress Cagliostro was locked up; Santarcangelo di Romagna and Pennabilli, places dear to Tonino Guerra; Torriana, with its 15th-century fortress; and Montebello, in whose thousand-year-old castle dwells the legend of Azzurrina's ghost. 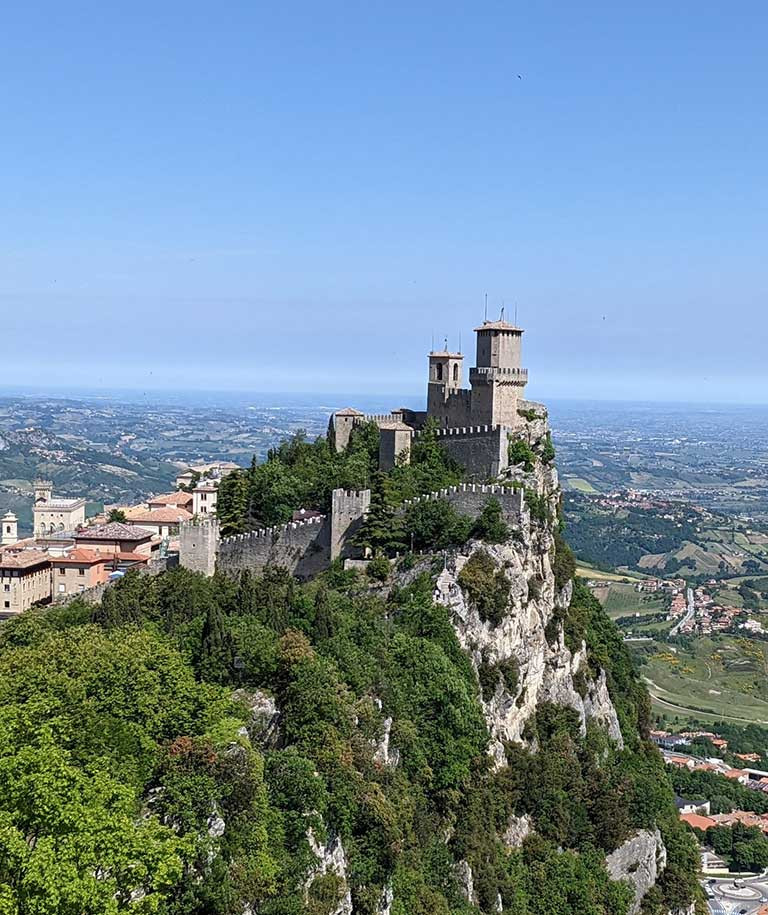 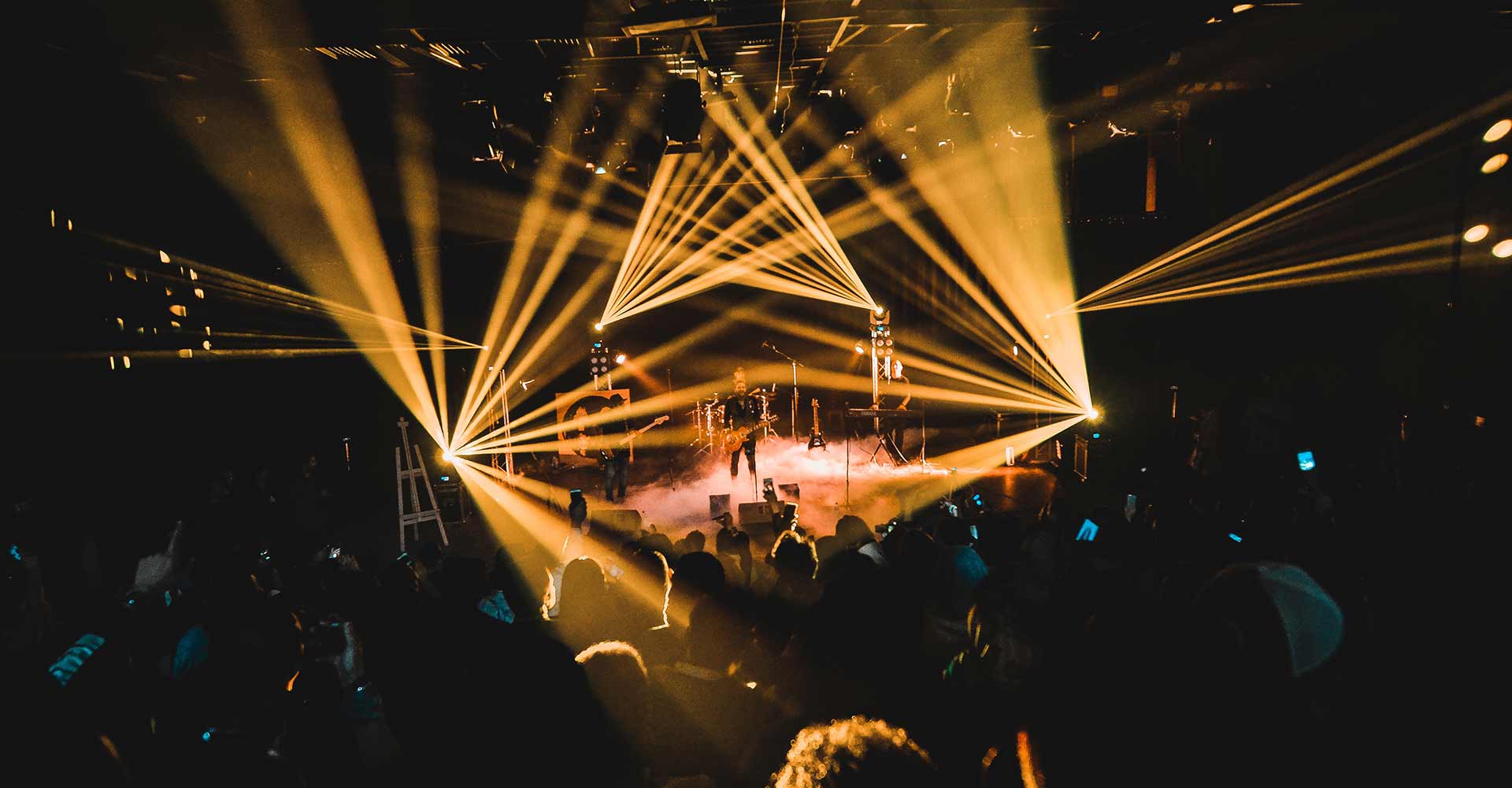 GET A QUOTE NOW

Fill out the form and get in touch with One Hotel. Request room availability and plan your next stay in Rimini, on the waterfront of the Romagna Riviera.